Introducing your next WAN—a software-defined perimeter, delivered as a service, and designed for today’s connected enterprise with a growing footprint of IoT deployments.

NetCloud Perimeter quickly connects IoT devices to applications, and remote & mobile workers to corporate resources regardless of location. IT pros and network teams can deploy, expand or contract a software-defined virtual network in minutes. It eliminates the hardware, complexity, and operational costs of traditional WANs—providing Internet reach with private network security for network admins, and LAN-like simplicity for mobile users. Now you can make the public Internet your private network without giving up visibility, security and control.

NetCloud Perimeter provides a simple, cloud-based alternative to VPN. It allows companies to build and deploy virtual overlay networks in minutes, connecting all their IoT devices and remote and mobile workers to business-critical resources. Offering cloud-based security, the NetCloud Perimeter service eliminates the hardware, complexity, and operational costs of traditional WANs. It enables easy deployment of changes at the network edge while maintaining security, visibility, and control as business requirements evolve.

Now IT teams can build and deploy secure virtual overlay networks in minutes to connect:

And create a software-defined perimeter—across the Internet or any private or public cloud.

NetCloud Perimeter works with existing network and security infrastructures. It requires no hardware or configuration, scales instantly, and is subscription-based. Build multiple secure overlay networks, tailored for purpose and per account, to scale and perform independently based on business needs. 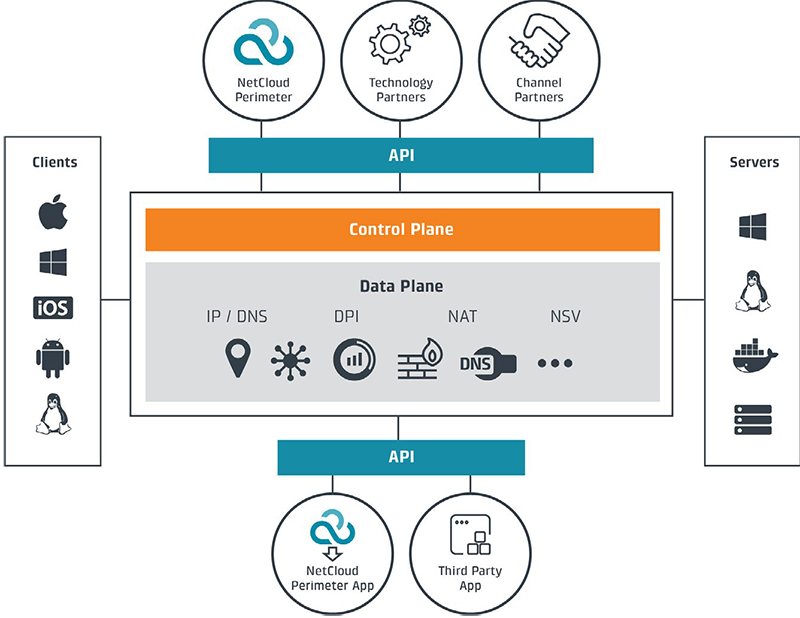 As enterprises continue to embrace workforce mobility, BYOD, and public cloud, protecting network borders and endpoints is no longer sufficient. NetCloud Perimeter’s security foundation is a multi-layer, network-based approach to security that protects users, devices, and workloads wherever they’re deployed. Key elements include:

These security building blocks help protect against a myriad of networkbased attacks:

Zero-Trust WANs: Contain Threats When & Where They Happen

As more subnets connect over the WAN, the “attack surface” of a breach or malware infection grows both inside or outside the firewall. To significantly limit the impact of such events, NetCloud Perimeter’s virtual networks can be microsegmented on a site, departmental, or even user- and device-level. The result is a zero-trust WAN that automatically isolates threats and quarantines them when and where they happen.

Rapid Deployment: Define in Minutes, Deploy With Your Tools

Extend the visibility, security, and control of perimeter networks within NetCloud Perimeter. In a few clicks, you can add services such as Active Directory integration, security policy deployment and micro-segmentation, and network bandwidth monitoring.

The NetCloud Perimeter platform overlays top-tier cloud data centers around the world, including Amazon AWS, Rackspace and Digital Ocean. This enables massive scale to accommodate large networks and traffic loads, and local points of presence to 80 percent of the world’s computing population. When a disruption occurs, the platform’s SDN and multi-cloud architecture enables affected networks to be automatically migrated to another data center—often within the TCP protocol connection timeout—so users’ sessions are maintained and users themselves are often unaware of any issue.